The Alchemy of Innovation

Innovation is widely accepted as a key driver of economic growth. We believe and rely on inventors and entrepreneurs to move forward our society, but where do those innovation heroes come from? The truth is that we know little about the factors which condition or determine innovation. If we are honest, we have to accept that, to a large extent, innovation today is like alchemy in a not too distant past: the transmutation of “ideas” into “socially valuable” solutions. That will surely change in a not too distant future.

Three recent studies delve into the social factors and personality traits behind invention and entrepreneurship. I briefly summarise their main findings.

In the first one(1), “Who Becomes an Inventor in America? The Importance of Exposure to Innovation,” the authors characterise the factors that determine who becomes an inventor in America by using de-identified data on 1.2 million inventors from patent records linked to tax records. They establish three main sets of results:

The authors put forward a model to show that increasing exposure to innovation in childhood may have larger impacts on innovation than increasing the financial incentives to innovate, for instance by cutting tax rates. They conclude that there are many “lost Einsteins”—individuals who would have had highly impactful inventions had they been exposed to innovation.

Our analysis does not provide guidance on which specific programs are most effective, but it does provide some guidance on how they should be targeted. In particular, targeting exposure programs to women, minorities, and children from low-income families who excel in math and science at early ages (e.g., as measured by performance on standardized tests) is likely to maximize their impacts on innovation. Furthermore, tailoring programs to participants’ backgrounds may increase their impact; for example, our findings suggest that women are more influenced by female inventors rather than male inventors.

More broadly, our findings suggest that policies designed to increase intergenerational mobility may also be beneficial for increasing economic growth. Drawing more low-income and minority children into science and innovation could increase their incomes thereby reducing the persistence of inequality across generations  while stimulating growth by harnessing currently under-utilized talent. Developing and testing methods to increase exposure to innovation among disadvantaged subgroups is therefore a particularly promising direction for research and policy.

In a second related paper(2), “The Social Origins of Inventors,” the authors find that household income may be masking the influence of other related factors:

Our analysis has interesting policy implications. In particular, it suggests that parental education and its impact on the child’s education is a major source of potential misallocation, with parental income and socioeconomic status also affecting misallocation, but to a lesser extent. Such intergenerational spillovers in education affect an economy’s ability to innovate. Indeed, we showed that achieving a higher education STEM degree increases an individual’s probability of becoming an inventor significantly, while making it much less dependent upon parental income. We found that the impact of father’s income on innovation is higher for high ability individuals, and that this extra impact also works mainly through education. This is evidence for misallocation being more severe for high ability individuals.

Taken together, our results suggest that by massively investing in education up to (STEM) PhD level, a country should significantly increase its aggregate innovation potential while making innovation more inclusive. Next, our results suggest that while IQ is of major importance in determining the level of education, family background in general and parental education in particular, play also an important role even in an equitable welfare state like Finland, where education is free up to and including university education.

Finally, a third study(3), “Personality Traits of Entrepreneurs: A Review of Recent Literature,” reviews the extensive literature since 2000 on the personality traits of entrepreneurs. This literature shows some common results and many points of disagreement, reflective of the heterogeneous, complex, and integrated nature of entrepreneurship. 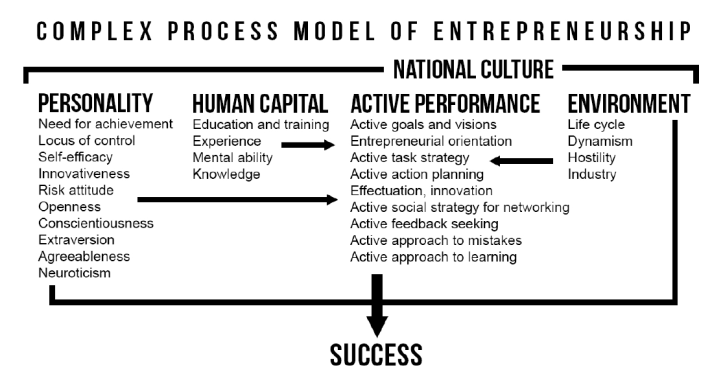 Entrepreneurs are a very heterogeneous bunch and the topic of personality/psychological traits of entrepreneurs is of great importance. Literature remains arguably underdeveloped due to the conceptual and empirical challenges faced by researchers. We should start to build the necessary language and taxonomy to better label these studies and their sub-populations, using the heterogeneity to our advantage:

We believe a productive path forward exists utilizing universal administrative datasets that characterize new firm creation and identify the founders of ventures. These data allow researchers to model directly the heterogeneous types of firms created, ranging from self-employed nannies to VC-backed startups, and to measure performance and venture success in objective ways. Moreover, the data provide insight into the careers that founders have before starting their companies, ranging from past business success/failure to the peers who they work with, and they describe the founding team that comes together. Powerful tools are also capturing digital signals about the growth intentions of founders when they set out (..) These data are already being matched with additional personal-level information ranging from stock portfolios to personality assessments.

Together, the three papers draw a clear picture. Innovation is all about IQ + education + exposure, and obviously a wealthy family gives you a head start. Implications are also clear: The more intelligent people we educate and get exposed to real challenges, the more innovation we will have. There are no easy shortcuts. This is a long-term bet.

Featured Image: “The Alchemist” by Pieter Brueghel the Younger