On the wrong track 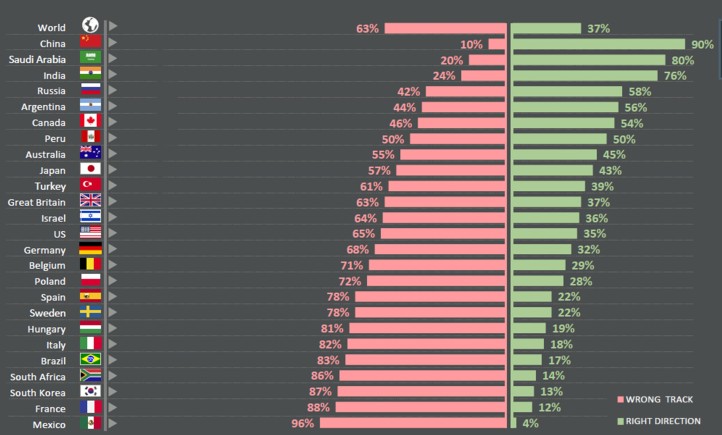 The majority of people around the world (63%) think things in their country are on the wrong track. Overall, unemployment currently occupies the top spot for global concern with 38% saying this. And do you know which country is the most concerned about unemployment? Spain!

You may be tempted to say: “Elementary, my dear Watson!” With one of the highest actual unemployment rates of the countries included in the study (19%), 71% are worried about it. However, in South Korea, actual unemployment is quite low at just 4%, but 57% of Koreans say it is a worry—around the same level as South Africa where the actual rate of employment is much higher (25%.)

In the case of immigration, Germany is the most worried country, but the actual proportion of immigrants which make up the German population is lower than in many other countries. In Canada, for example, the actual level of immigration is 21% but just 17% of the population say they are concerned about it as an issue. Similarly, Britain has an immigrant population level less than half that seen in Australia, where 28% of Australians are immigrants, but Britons are much more likely to be worried about immigration (36% vs. 25%).

The findings come from “What Worries the World”, an Ipsos survey of online adults aged under 65 in 25 countries, published last November 2016. Their conclusion is categorical:

It’s clear from the findings that the level of worry about key issues in different countries often bears little relationship to reality.”

Climate change is not such a high concern globally, ranking 15th with only 8% worried about it. Interestingly, China is the country most concerned (23%) about it. Which brings me to what I find most striking (see figure above): the comparison across countries/regions, with the “West” clearly on the wrong truck, while people in China (90%), Saudi Arabia (80%), India (76%), and even Russia (76%) think their countries are going in the right direction!

Evidence is mounting that the pendulum of “forward-lookingness” is swinging back to East.

Featured Image: What worries the World – October 2016 from Ipsos MORI