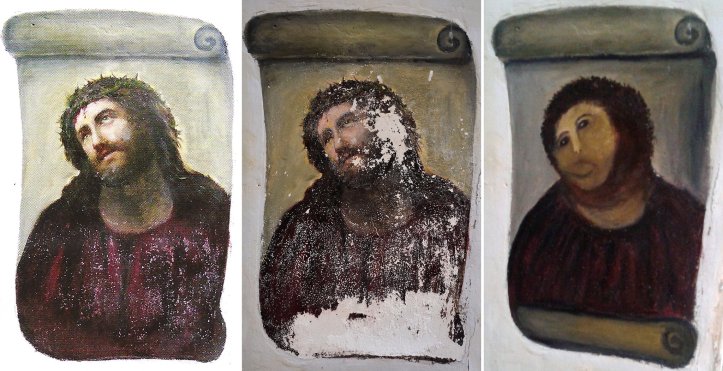 Neither aging, lack of skills or resources pose a limitation when the gale of success is blowing at your back.

Cecilia Giménez was in her 80s when she became a celebrity in August 2012. She was trying to restore a damaged “Ecce Homo” created by Spanish painter Elías García Martínez circa 1930, and donated to the Santuario de Misericordia Church in the Spanish town of Borja (Zaragoza). The task proved more difficult than expected, and when authorities went to check on, they found the fresco drastically altered. They initially suspected vandalism, but Cecilia eventually came forward to confess.

On August 21st, 2012, the Spanish Heraldo de Aragón published an article about the botched restoration, and Cecilia was all but crucified. Her failed attempt to restore the fresco was described as the ‘worst restoration ever’.

The once-dignified portrait now resembles a crayon sketch of a very hairy monkey in an ill-fitting tunic,

Potato Jesus attracted international attention and became an online meme. As a result of the worldwide exposure, Cecilia suffered from panic attacks. However, on August 22nd the tables turned. A Facebook group titled Beast Jesus Restoration Society was created, receiving more than 4000 likes in just under two weeks. And a Change.org petition urged officials not to remove Cecilia’s restoration:

The daring work done by the spontaneous artist in the Ecce Homo Sanctuary of Mercy of Borja, is an endearing act of love, an intelligent reflection about the political and social situation of our time. It reveals a subtle criticism of Church’s creationist theories, while questioning the emergence of new idols. The result of the intervention intelligently combines Francisco de Goya’s primitive expressionism with artists such as Ensor, Munch, Modigliani or the Die Brücke group, belonging to the artistic movement of German Expressionism.

People of Borja immediately realised that the ‘new’ Ecce Homo was doing more for the town than the original one ever did. They printed T-shirts with potato Jesus on them, and local vineyards vied to acquire the rights to use the image on their labels.

Unsurprisingly, a court had to rule about who ‘owned’ the new version of Borja’s Ecce Homo, and decided that proceeds should be split between the hospital foundation that manages the church and Cecilia, who now owns 49 per cent of the copyright.

In a twist of fate, Cecilia’s failed restoration has had an unexpected positive impact on the town of Borja, which has undergone a miraculous recovery thanks to tourism. More than 150,000 tourists has visited the town since august 2012. The story of Cecilia and her unsolicited brushwork has made it into a comic opera, and this week Assumpta Serna and Scott Cleverdon presented a new documentary, Fresco Fiasco, and a museum dedicated to Cecilia Giménez has just opened.

Certainly, God works in mysterious ways. And yes, chance is part of what we may call the mechanics of reality.