Frequently Censored Topics On The Net

Internet freedom around the world has declined for the fifth consecutive year, according to Freedom House’s report “Freedom on the Net 2015”.

More governments are censoring information of public interest and placing greater demands on the private sector to take down offending content. Of the 65 countries assessed, 32 have been on a negative trajectory since June 2014. The most significant declines occurred in Libya, Ukraine, and France. China was the year’s worst abuser of internet freedom.

Governments around the world have moved to ban encryption and undermine anonymity for all internet users, and are now pressuring companies and individuals to remove content, as opposed to simply blocking. 14 of 65 countries passed new laws to increase surveillance over the past year. In the Middle East, flogging, life sentences, and beheadings deterred the sort of digital organizing that contributed to the Arab Spring.

It remains to be seen whether repressive efforts will be sustainable in the long run. 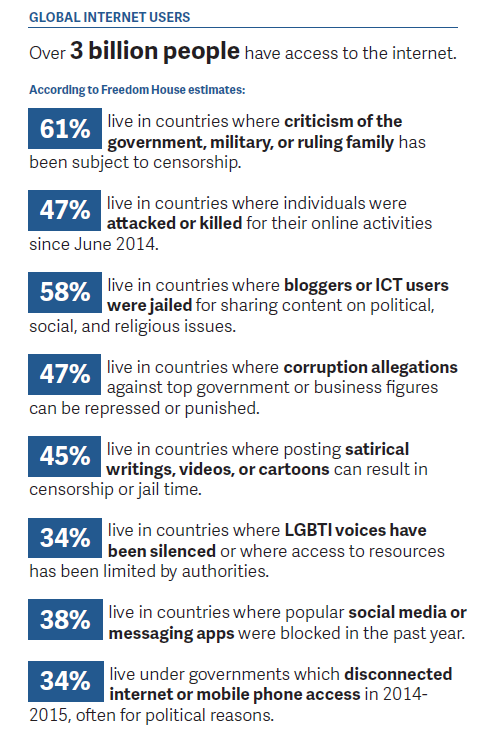 Featured Image: Iranian cartoonist Atena Farghadani was sentenced to 12 years in prison on charges of insulting state officials and spreading propaganda for posting this image on Facebook depicting members of parliament as animals, casting votes on proposed legislation to limit reproductive rights. (via Freedom House)