That’s Not What We Are 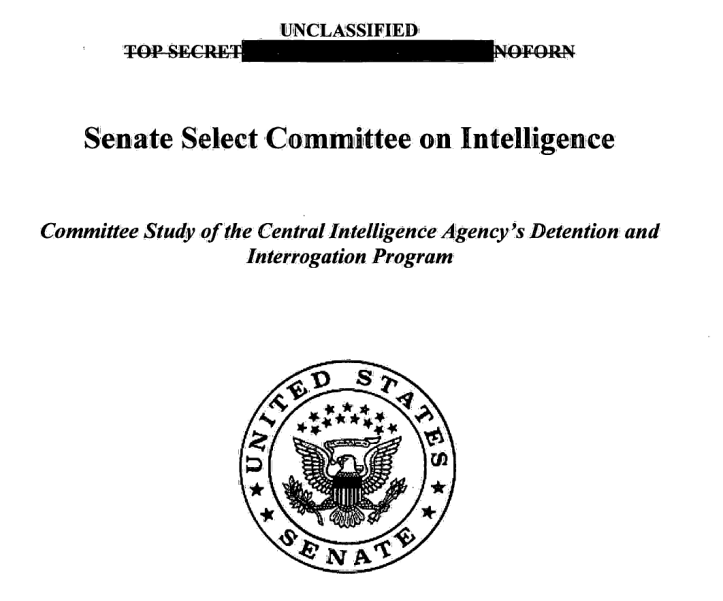 After a long political battle, last Tuesday, December 9, the Senate released a report documenting the “CIA’s detention and interrogation program”. The Senate Intelligence Committee, led by Democratic California Senator Dianne Feinstein, compiled a study detailing how the CIA handled its prisoners during the so-called ‘war on terror.’ In the foreword, Dianne Feinstein writes:

I began my service on the Senate Intelligence Committee in January 2001 (…) I have attempted throughout to remember the impact on the nation and to the CIA workforce from the attacks of September 11, 2001. I can understand the CIA’s impulse to consider the use of every possible tool to gather intelligence and remove terrorists from the battlefield,^ and CIA was encouraged by political leaders and the public to do whatever it could to prevent another attack.

Nevertheless, such pressure, fear, and expectation of further terrorist plots do not justify, temper, or excuse improper actions taken by individuals or organizations in the name of national security. The major lesson of this report is that regardless of the pressures and the need to act, the Intelligence Community’s actions must always reflect who we are as a nation, and adhere to our laws and standards. It is precisely at these times of national crisis that our government must be guided by the lessons of our history and subject decisions to internal and external review. (“Committee Study of the Central Intelligence Agency’s Detention and Interrogation Program”)

Obama, who stopped “enhanced interrogation techniques” when he became president, admitted that some of the tactics uncovered in the report were “brutal, and as I’ve said before, constituted torture, in my mind. And that’s not who we are.”

Yet torture is who they are. Certainly admitting wrong-doing is also part of who Americans are. All countries fail to live up to the ethical standards they set themselves; only a few have the moral purpose to examine their lapses in the public square.

We can be sure of one thing about the US Senate report into the torture of terror suspects by the CIA: it would not have been published in the Britain of today. (The Guardian, “CIA torture report: at least the Americans came clean. In Britain, no one is held to account”)

But the wrong-doing remains part of the behaviour which constitutes “who they are”. It does not vanish with a subsequent apology. In fact, currently “what humans are”, all around the world, includes the use of torture. Even though it is prohibited under international law and the domestic laws of most countries, only over the last five years, Amnesty International has reported on torture in at least three quarters of the world – 141 countries, from every region.

Since shortly after the September 11, 2001 attacks there has been a debate in the United States about whether torture is justified in some circumstances. Are there times when we have to accept torture? The debate is not new and it is not easy: What to do to a captured terrorist who has placed a nuclear time bomb in a populated area? It is a scene we are familiar with, if only because it is endlessly used in movies.

Interestingly, the first conclusion of the Committee is quite simple: “The CIA’s use of its enhanced interrogation techniques was not an effective means of acquiring intelligence or gaining cooperation from detainees”. This conclusion should come as no surprise, because it is widely known that torture is not about secretly collecting information:

Torture only works when it isn’t secret. Fear is only effective when it spreads. Terrorism only works when it happens in public. (…) The Nazis and Soviets understood this. The world’s most brutal dictators—to whom the CIA outsourced some of its torture—also understand it.

Torture is a terrible method of interrogation but it’s a great way of spreading terror. (Matthew Gault, “Guess Who Else Tortured People Like the CIA Did — Soviets and Nazis”)

There is a wide philosophical consensus that torture is immoral, that evidence extracted by torture is unreliable, and that torture corrupts institutions that tolerate it. The CIA and other US authorities surely knew this. Furthermore, they did not act alone, but engaged a number of partners from more than 50 countries around the globe who must have also known it. So what did they actually intend with the programme?

Certainly, the American and British soldiers in Iraq, like maybe some torturers, do not think of themselves as evil, but rather as guardians of the common good. They are the ones who allow the rest of us to enjoy our bubble of freedom. They deal with stuff we just don’t want to see. But there must be a limit for doing evil in the name of good. Or can one and the same act be evil in some circumstances and good in others? Can context completely change the moral judgement on a specific human behaviour?

Are we that scared? Are we so scared that we are willing to knowingly let others perpetrate, in the dark and in our name, acts of terror that will eternally corrode and corrupt us? (Ariel Dorfman, “Are there times when we have to accept torture?”)