I learnt the “meaning” of “cool” watching the MTV series “Beavis and Butthead” in the 90’s. This couple of disgusting dudes were watching music videos and making mischief all the time, and they judged everything by repeating whimsically “cool” or “this sucks!”. Cool was not merely another way of saying good. Coolness is an admired aesthetic of attitude, behaviour, comportment, appearance and style.

Beavis and Butthead used to deem something “cool” if it was associated with violence, sex or the macabre. Their idea of coolness may well not be generally accepted. What is considered cool changes over time and varies among cultures and generations. People with similar backgrounds and interests tend to agree on what is more and less cool within a particular social context. Like other socially constructed traits, such as popularity or status, coolness is not an inherent feature of an object or person. Objects and people are cool only to the extent that others consider them cool.

What makes things cool? In a new paper in the Journal of Consumer Research, Caleb Warren and Margaret Campbell hypothesize that coolness stems from “appropriate autonomy” and that the relationship between autonomy and perceived coolness is more nuanced than previously discussed in the literature. 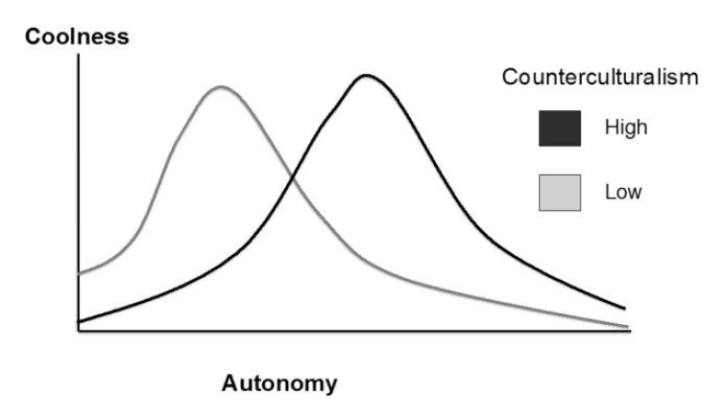 Warren and Campbell propose that the relationship between autonomy and perceived coolness depends on the legitimacy of the norm from which the autonomous behaviour diverges, the extremity of autonomy, and the world-view of the perceiver. They have tested their hypothesis running six studies to reach the conclusion that:

Cool means departing from norms that we consider unnecessary, illegitimate, or repressive, but doing so in ways that are bounded.

Behaviours expressing autonomy increase perceived coolness but only when they diverge from a norm considered unnecessary, illegitimate or overly repressive, and when divergence is bounded—meaning small or occasional rather than large or perpetual. Coolness and desirability are not the same thing. Consumers prefer cool brands only when they want to stand out rather than fit in.