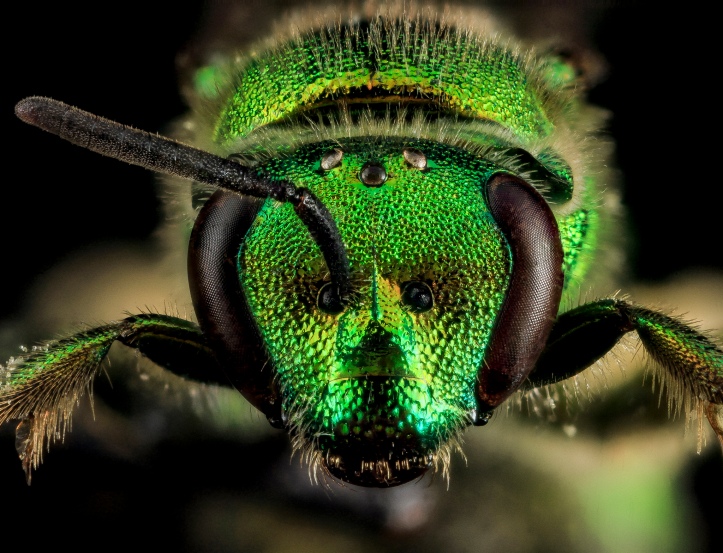 There is a whole world of detail out there…

Looking to this incredible collection of bees, you realise the sheer amount of complexity surrounding us that we usually overlook (e.g. when just trying to get rid of one of those pesky flies on a hot summer afternoon.) Flies or bees see the world in a completely different fashion than us. We may be near each other but our minds are far away, as if we were in parallel universes separated by… scale.

There is a large difference between big and small animals. Body size and metabolic rate constrain how they interact with their environment. However, very little is known about the constraints imposed by sensory limitations. Yet, the relative resolution at which different organisms are able to acquire and process, for example, visual information is very likely to restrict their ability to interact with events around them. This is the hypothesis put to test by a group of researchers at Trinity College Dublin.

They carried out a comparative analysis of the maximum rate of temporal information processing in the visual system of a wide range of vertebrates, using critical flicker fusion frequency. The flicker fusion threshold is defined as the frequency at which an intermittent light stimulus appears to be completely steady to an observer.

If you own a dog, you may be surprised to learn it doesn’t like to watch your favourite TV show. TV, computers and cinema screens all flicker but provide the illusion of constant images because of the high frequencies at which they operate. High for us but perhaps not enough for a dog whose visual system has a refresh rate higher than the TV screen.

The Trinity group conclude that animals smaller than us see the world in slow motion. For a fly your threatening rolled-up newspaper is like those flying bullets Keanu Reeves dodges in the Matrix:

Our focus was on vertebrates, but if you look at flies, they can perceive light flickering up to four times faster than we can. You can imagine a fly literally seeing everything in slow motion. (“Time passes more slowly for flies, study finds”, The Guardian)

Interestingly, they think this effect may also account for the way time seems to speed up as we get older:

It’s tempting to think that for children time moves more slowly than it does for grownups, and there is some evidence that it might,

People have shown in humans that flicker fusion frequency is related to a person’s subjective perception of time, and it changes with age. It’s certainly faster in children.  (“Time passes more slowly for flies, study finds”, The Guardian)

From an evolutionary perspective, there must be a trade-off between the demand for information at high temporal resolution and the costs of its acquisition given the energetic demands associated with increased rates of neural processing in the visual system. This trade-off is likely shaped by factors like mode of predation, light levels or internal morphology:

Ecology for an organism is all about finding a niche where you can succeed that no-one else can occupy. Our results suggest that time perception offers an as yet unstudied dimension along which animals can specialise and there is considerable scope to study this system in more detail. We are beginning to understand that there is a whole world of detail out there that only some animals can perceive and it’s fascinating to think of how they might perceive the world differently to us. (“Time Is in the Eye of the Beholder: Time Perception in Animals Depends On Their Pace of Life”, Science Daily)

Species might occupy the same spatial and temporal niche and be separated as a result of having evolved divergent signalling systems with wildly temporal resolution. In theory, it seems possible to encode information in high-frequency signals that could be detected by intended receivers such as conspecifics but that wouldn’t be susceptible to ‘eavesdropping’ by (generally larger) predators.

Flies and children might not be deep thinkers, but they can make decisions faster than you. And can you be sure these rocks are not just going slowly?

Featured Image: Augochloropsis metallica, CC BY USGS/Sam Droege: “This bee is in your garden! Have you seen it? Collected on the Tomatoes in Francisco Posada’s in Laurel, Maryland”